Benefits of Railway Competition: the Case of Italy The landscape in the railway industry has changed drastically in the last several years due to newfound competition in select markets, especially in Europe where the European Union made a great effort to issue directives on European market liberalisation within its Member States.

Competition is well recognized to be beneficial in other industries, specifically aviation and telecommunication. With more airlines competing for customers, consumers are able to benefit from lower prices and more options. For cell phones, the plethora of existing companies and competition makes it easier than ever to afford a personal communication device. However, when it comes to the railway industry, it is difficult to analyse the advantages of competition, especially in the long-distance passenger segment, considering the structure of this sector has been stable for many decades, with national railway companies (often directly dependent on the Ministry of Transport, or Treasury in the Italian case) operating as monopolists, assisted by private companies operating on minor routes (usually under concession).

If we look at the long-distance passenger railway transport, we can find a relatively open market only in a few countries: Austria, the Czech Republic, Sweden, Italy, and South Korea (just recently) for the high-speed railway (HSR) segment. All these countries will be analysed in this study.

What this paper concludes is that thanks to competition, train passengers and consumers in Italy are now much better off, owing to a decrease in ticket prices by more than 40 per cent. And that has allowed demand to be doubled without building new high-speed rail lines. As such, Italy is a great example to examine as a case study when it comes to competition in the transportation sector.

After several directives between the 1980s and the 1990s, the most important of which was the Directive 440/91/EC, several positive changes have occurred in the European Union. Between 2001 and 2016, the EU approved four legislative packages aiming at gradually opening up rail transport service market to competition, defining passengers’ rights about minimum quality standards, making national railway systems interoperable, and defining appropriate framework conditions for the development of a single European railway area. The Italian legislation enforcing these directives was not easy to implement, as in other European countries, but Italy was the first member state that proved successful in opening the HSR market to competition.

The new regime of competition began in April 2012, when the private company, Italo (managed by Nuovo Trasporto Viaggiatori), entered the market. The existing rail incumbent at that time, Frecciarossa, managed by Trenitalia, was wholly owned and operated by the national railway company Ferrovie dello Stato Italiane, a conglomerate holding of the railway sector including service, infrastructure, and transportation of goods, as required by European legislation concerning the separation between the infrastructure manager and the service operator.

If we look at Chart 1, we are able to examine the decrease of prices relative to the development of demand in the HSR market with competition between 2011 (the year before its entry in the market) and 2017. Demand went up despite economic recessions, as represented by the change of the Gross Domestic Product (GDP). The estimation of the number of passenger-kilometers between 2011-2017 shows an increase of nearly 90% of demand within five years, despite a contraction in the Italian GDP in that same period.

The previously described price drop yielded important benefits for customers. In particular, we can calculate customer savings from 2012 comparing the average current prices of Italo with the previously registered prices from pre-competition times (Chart 2). As we can see from the previous chart, there was a higher savings increase between 2016-2017 than in the period of 2012-2015. This phenomenon can be explained with two factors: the decrease in Italo’s average ticket price and the incremental growth in the number of Italo’s overall passengers.

THE CONSUMER IS THE WINNER: QUALITY AND PRICE

The intermodality of seamless transportation is not just a theoretical concept, as Italy proves. The development of the Italo Bus at the same time meant customers were able to hold a single ticket for both the bus and train. Fare integration due to the seat inventory system and the revenue management system was put in operation in 2015 to transition to a seamless integration between two transport modes.

The Italo Bus allows the train sector to enlarge the catchment area of the high-speed stations with a lower risk for the passengers (integration of the schedule and single operation responsibility for the connection).

Flexibility is the other key factor of this innovation. The asset of a rail company is fixed in the short period. The train cars are very expensive and must be purchased and maintained via strategic decisions for long periods.

The seat inventory system and revenue management were able to be innovated by introducing a quick-decision system to control the price of tickets. A short command and control chain and the capability of the systems to be flexible yielded the possibility to adjust prices in just a few hours in order to match the price point of competitors.

The service-oriented architecture allows the company, therefore, to link all the sub-systems from revenue management to the reservation system.

This is a furthered by the fact that close to 80 percent of the tickets are now sold online and via app stores. More customers use digital methods for purchasing tickets, and thus application software is the preferred way for railway companies to match the demand, helped with adequate social media marketing.

Both of these innovations result in greater convenience in the use of the train for consumers and the simultaneous increase in the quality of service of railway operators.

THE AVERAGE TICKET PRICE IN ITALY

As shown in Chart 3, the price is much lower than in monopolist markets such as Spain, France or Japan. In particular, vertically integrated transportation businesses, like in Japan, shows that the price is nearly three times higher than in Italy.

A similar price level could be found also for the Thalys company in the Benelux region and beyond (international high-speed services between France, Belgium, Netherlands, and Germany), where even if in theory, the market is open, it is impossible for competitors to find a way to enter in the market. 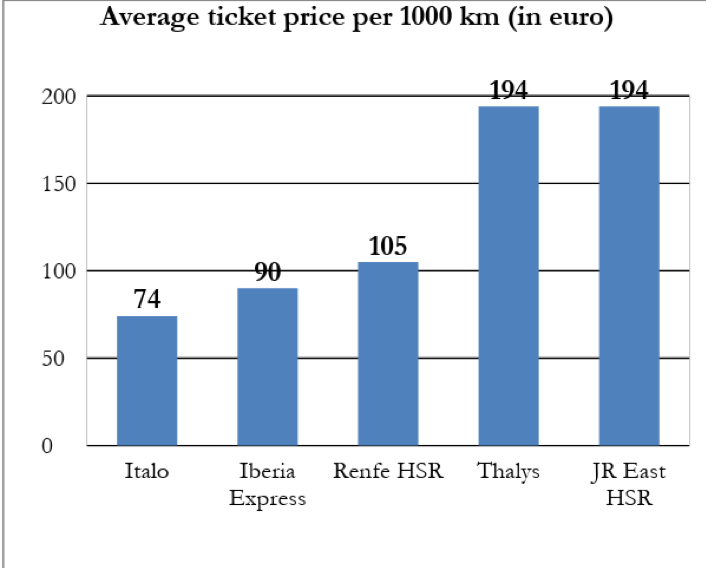 After the analysis of the Italian case, we now examine other countries that decided to open their markets to competition. In particular:

As described in the first chapter, one of the main factors affected by the competition system is the demand level, as shown in Chart 4, which represents the growth between a pre-competition market and the last data or estimation for every single market. Chart 4 – Demand increase in countries with a competitive system

Therefore, we can see that open access permits railway companies to also reduce the prices of the tickets to try to attract more customers. In the analysis, we calculated the yield difference in the rail passenger open-access markets before the opening of the market compared with the last available data after market competition.

It is possible to link the demand and the price to find the demand elasticity. If the value of this is higher than 1, it means the total value of the rail market is increasing thanks to competition. The higher level of elasticity in South Korea is due to the fact that SRT is using a new HSR line for 60 kilometers, while in all other countries the increase of the demand was entirely due to the competition. Chart 5 – Yield decrease in countries with a competitive system

Competition, as a whole, is very good for consumers as it leads to lower prices and more efficient savings. This has been demonstrated using the case of highspeed rail services in Italy and other markets. At the same time, this increased competition yields more choice for the consumer and higher quality services, as established in the Italian case.

The European Commission has obliged Member States to open up their railways to competition, but as with many directives, the devil will be in the details. There are many challenges on the road to providing European citizens with a competitive railway market. Open access competition will likely be opposed by the lobbying of the incumbent rail companies, as shown in the case of the Paris-Brussels route.

Above all, it is hoped that this paper establishes a guideline for the benefits of railway competition in European and global markets. He is also a visiting professor at the China Academy of Railways Sciences, the biggest academy in the world for the railways and he is teaching at UIC (International Association of Railways). He is working directly with airlines from Latin America, the Middle East, and Europe, analysing the evolution of the market and the customer needs. He was the head of the studies office and international affairs of NTV, first high-speed rail private operator in Europe, developing studies and analyses on the rail sector. He remains at the company as a strategic advisor. Dr. Roberto Tosatti works as a business consultant at TRA Consulting, a strategic consultancy company based in Barcelona, Bruxelles and Milan conducting benchmarking, strategic, and impact analysis for the transportation sector.

He has produced dozens of papers on transportation and telecommunications at Milano-Bicocca University. In addition, he is a business and healthcare consultant for P.G.M.D. Consulting, Deloitte, and the commercial division of the public transportation company of Milan. He has worked across Europe and Asia.